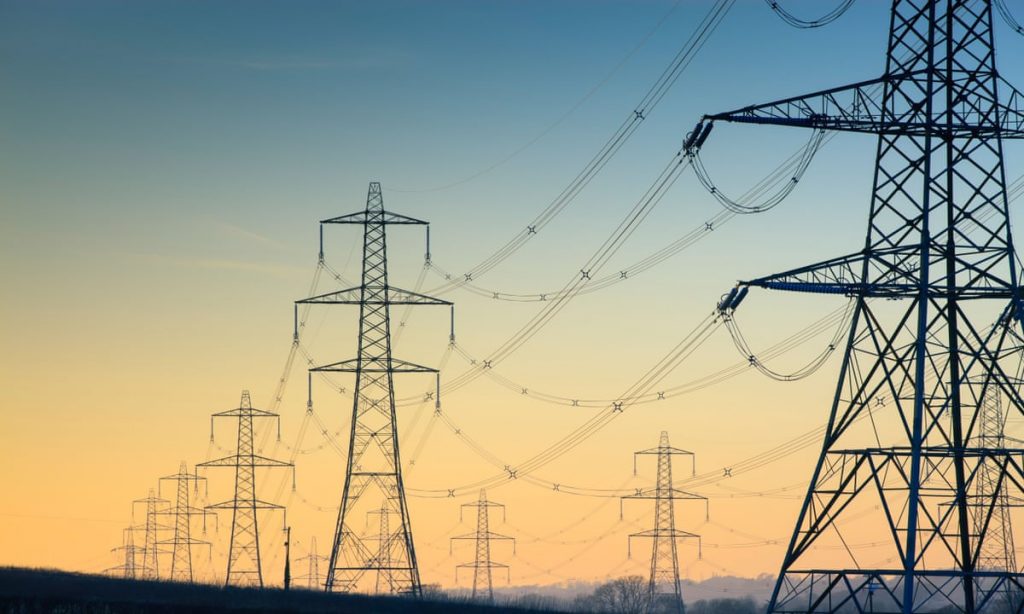 Microgrids, Virtual power plants and Embedded network solutions have been talking points lately. I’ll give you a rundown of what these are and how they can be useful.

Already in use in other countries such as Australia, and the UK, Virtual power plants could be a great way for us to manage electricity demand on our current grid infrastructure.

In a centralised ‘power plant’ setup, electricity is produced using hydro like in Clyde or Coal like Huntly. Electricity travels along the poles and wires to your home. When you start cooking dinner, Clyde hydro releases more water or Huntly tips some more Coal in the burner.

Once your dinner is done, the hydro winds down. The coal plant, being slow to react, will provide baseload electricity until it can wind down.

A network of home solar and battery systems combine their capacity to provide power to the grid on demand.

When your neighbours start cooking, your battery can be discharged to provide electricity. Demand is reduced for the centralised power plants, also meaning less congestion on the poles and wires.

Virtual power plants avoid the transmission losses that usually occur when electricity has to travel long distances, as electricity travels on the local network.

For you to take part in a VPP you need a battery, solar panels and an internet connection. You don’t necessarily need solar panels, but it definitely helps.

Several VPP financial models exist. Some allow you to set the price that you will buy and sell electricity at. Which is great as you are able to play in the electricity market. Setting your price low for charging and high for selling, you could be quids in. Networks(grid) can pay you a monthly fee for providing this service. 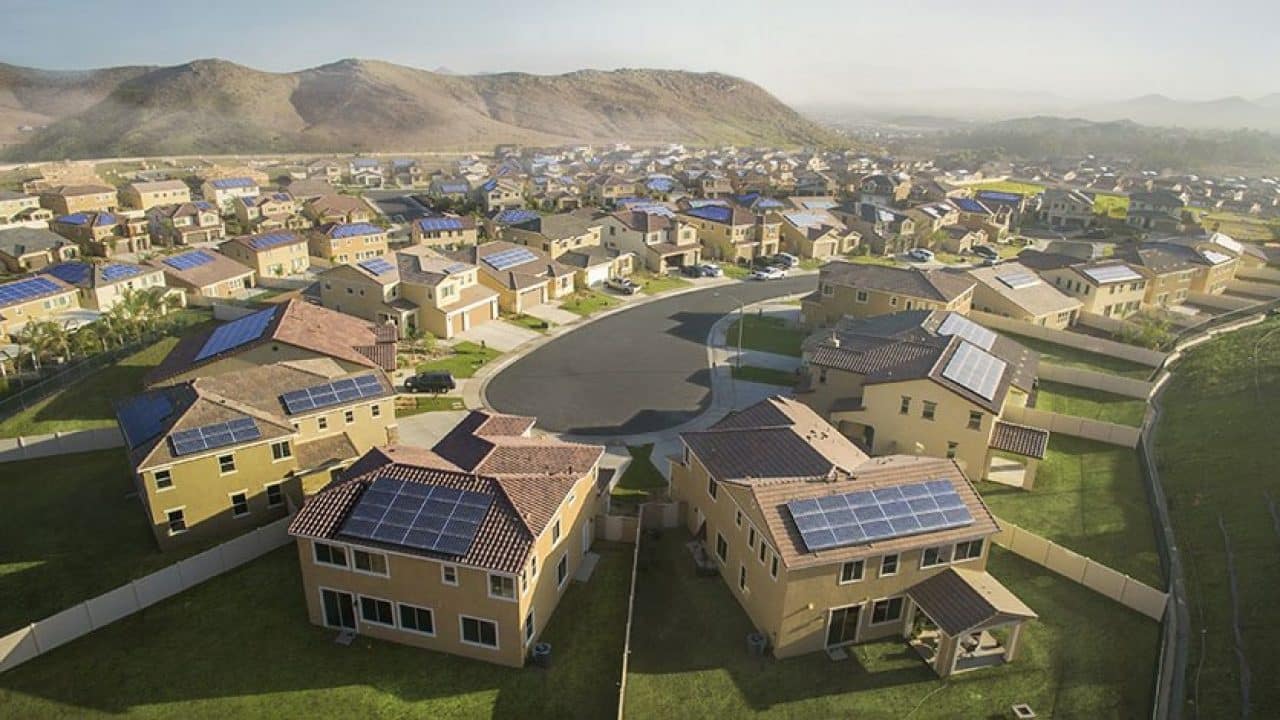 Imagine it’s pouring with rain, the wind is up, power is cheap and electricity demand is low. You can charge your battery from the grid for next to nothing, in fact, you’re doing the grid a favour.

Now imagine the opposite. It’s 32º and clear blue skies, air conditioners are working away. Your solar is cranking, your battery is fully charged, in fact, you have power spare. The grid is buckling under pressure, and you can sell back solar and battery energy for premium prices.

Solar Zero has blown their marketing budget in the Queenstown lakes region, encouraging locals to join their plan. Although not working yet, this does have the potential to be a VPP.

The catch is, instead of giving their customers access to the electricity market and the benefits that come with it. The benefits are heavily weighted in Solar Zero’s favour.

Essentially their customers will be paying for the infrastructure (batteries + Solar), then when the grid needs extra electricity, their customers’ batteries will be discharged to service the grid. Solar Zero will cash in on the premium power prices.

While their customers pay them a monthly fee, Solar Zero is getting paid by the network(grid) for providing the service. Which is actually paid for in turn,  by everybody’s line fees.

Solar Zero customers won’t get the benefits of playing on the electricity market that you get from other VPP providers.

You are much better off owning your system and reaping the rewards yourself.

How can I join a VPP

Check out virtual power plants currently active in Australia below:

https://www.solarquotes.com.au/battery-storage/vpp-comparison/, you can see how the benefits work.

Without the main grid, you and your neighbours are responsible for keeping the lights on.

Your excess solar power will be used by your neighbours and you will use theirs.

Microgrids are a really efficient way to power multiple off grid homes. Sharing community power means less battery storage and solar panels may be required for each individual system.

The pacific islands are the best example where microgrids are developing. Reducing reliance on oil for electricity, lowering their carbon emissions and cutting expenses for local people. 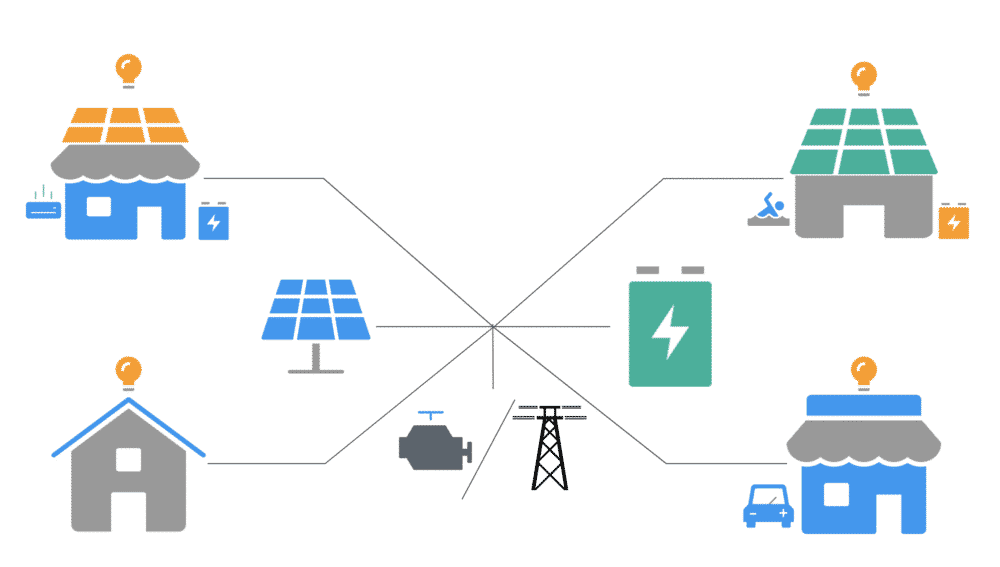 Embedded networks are private networks attached to the end of the large network(Aurora). Consisting of a group of interconnected houses, with a single connection point to the grid.

The best opportunity to install an embedded network is in a new housing development. As developments are started from scratch, it’s much easier to install the correct infrastructure at this stage.

Solar and battery systems installed on your house within the embedded network, allows private energy trading between you and your neighbour.

Spare power from any of your neighbours will circulate around on the private network and be used by neighbours houses. Any spare power will go back out to the wider grid to receive credit.

Embedded networks are great as they incentivise you to generate and manage your own and your neighbour’s energy needs. Less energy is required from the wider grid means less strain on the poles and wires.

Embedded networks could even join into a wider virtual power plant to receive extra benefits for their surplus energy. 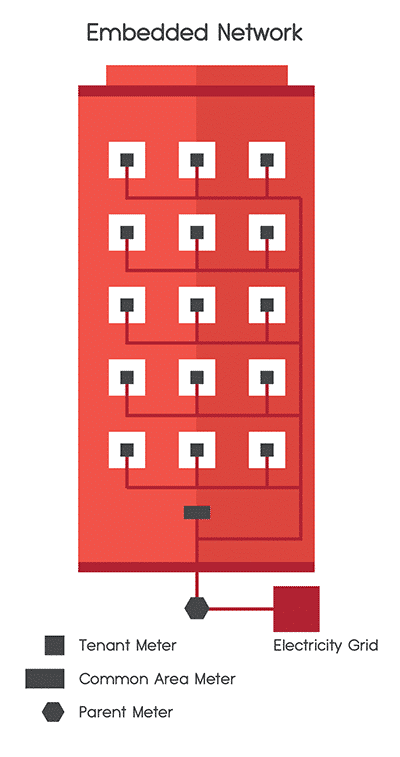 Do they make the community more resilient?

Community resilience, energy shortages and power outages can be helped and relieved by some of the systems above. Other systems, although marketed well may not help so much.

Microgrids are not connected to the greater network. Which means they are very resilient in their own right. Energy shortages from low lake levels, low winds or high fossil fuel prices will hardly affect microgrids at all. They will not add to the overall resilience of the wider network.

Virtual power plants(if used correctly), can reduce the load on the greater network as your home batteries are discharged to service the high network load, meaning less power is drawn from the grid.

Being part of the electricity market is the best way to make a virtual power plant work. As the demand on the grid becomes higher, the grid will be willing to pay more for the electricity stored in your battery, giving you a higher incentive to discharge the grid. The opposite goes for if there is too much generation on the network(heavy rain/high winds), you have the incentive to charge your battery and take the power off their hands for a minimal cost.

Embedded networks can be highly self-sufficient, due to a large number of homes within the network using solar and batteries. A group of self-sufficient homes remove the extra load that would have been on the grid if they had a regular grid connection. This lowers the overall strain on the grid.

Embedded networks could also offer virtual power plant services to the grid, as more often than not they will have excess power available.

For ultimate community resilience, there needs to be a large battery at the grid entry point to your town or area. If there are any major power outages, this battery can serve as a backup to the grid, allowing you and your neighbour’s homes to keep the lights on. Also keeping your solar and battery system up and running.

It’s also possible a blockchain virtual power plant could work in a way that you use the large community battery to store your own excess electricity, instead of having your own battery.

What are the roadblocks?

For these things to become commonplace some things need to change. You need to have more reason to want to partake in things like virtual power plants.

I think the network(Aurora) has a big part to play in getting things like VPP’s and embedded networks off the ground. There are a few levers they can pull to make this more worthwhile for you and for them.

Sometimes the network gets really overloaded. If you have solar or a battery then you are really helping out. For one you’re not adding to that demand and most probably you’re sending power back to actually reduce it. If the network rewarded you for this service you’re providing to them, then more people would be encouraged to go solar.

Currently, around half of the cost you pay per unit of electricity is paying for the cost of getting electricity transported from Clyde hydro dam. This is still the case if you buy electricity that is exported by your next door neighbour.

I believe the network could create a fairer system. When electricity is purchased from within the community, the extra infrastructure costs should be reduced as less of the infrastructure is being used. This will encourage locals to provide and use more community generated electricity. In turn, reducing pressure on the poles and wires.

Of course, this isn’t weighted in the network’s interest, as they get paid from your electricity travelling down their poles and wires. Why would they want to reduce that?

A simple way to reduce overloading the network is to introduce time of use tariffs. Which currently is only available through the large electricity retailers(As they can discount the electricity price, not the network charges). Lots of us have EV batteries and heating systems that could all be controlled to use electricity outside of peak times. Any incentive for doing this would surely reduce the peak demand on the network and reduce the need for expensive upgrades(not to be confused with the current ripple controlled system).

Spot pricing is available through some electricity retailers. Meaning the price you are charged for electricity changes depending on the market price. This could change many times throughout a single day.

Spot pricing is a more recent option for residential users, but as electricity spot prices have gone sky high because of low lake levels, gas plants breaking down and expensive coal. Most retailers have revoked this option to avoid exposing their customers to ridiculous prices.

Electric vehicles in the mix

EV’s will likely become part of the solution. Vehicle to grid charging/discharging will become commonplace in the future. It is not only your home battery that will be able to contribute to the greater network, your EV could too.

Wallbox will be releasing a charger with bidirectional charging capability in 2021/2022 in New Zealand. We don’t have much detail on it yet but will keep you updated when we do. Check it out here. https://wallbox.com/en_catalog/quasar-dc-charger

I hope this has given you some insight into the latest/future energy developments. If you want to read more about this sector, I encourage you to check out the rest of our knowledge hub.